The Display That Watches You

For decades, engineers have envisioned wearable displays for pilots, surgeons, and mechanics. But so far, a compact wearable display that's easy to interact with has proved elusive. 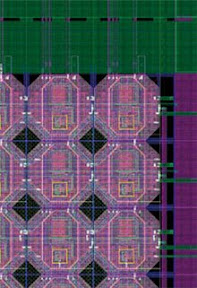 Researchers at Fraunhofer Institute for Photonic Microsystems (IPMS) have now developed a screen technology that could help make wearable displays more compact and simpler to use. By interlacing photodetector cells--similar to those used to capture light in a camera--with display pixels, the researchers have built a system that can display a moving image while also detecting movement directly in front of it. Tracking a person's eye movements while she looks at the screen could allow for eye-tracking control: instead of using hand controls or another form of input, a user could flip through menu options on a screen by looking at the right part of the screen. The researchers envisage eventually integrating the screen with an augmented-reality system.